I'm just finishing up A Retreat for Lay People, which I planned to read over Lent, and have actually followed through on that plan. There's a lot of really good stuff here, a lot of quotable stuff. The next-to-last chapter is about Mary Magdalene, and this seems a good note for what will most likely be my last post, apart from the psalms, until Easter Monday.

For many dogs are come about me,
and the council of the wicked layeth siege against me.
They pierced my hands and my feet; I may tell all my bones;
they stand staring and looking upon me.

The opening of this psalm is surely one of the most important for Christians. Usually it's not too far from what I grew up with in the King James:

My God, my God, why hast thou forsaken me?

Though I don't recall hearing the words that follow:

why art thou so far from helping me, and from the words of my roaring?

"Roaring" sounds pretty odd to our ears, and presumably had different connotations at the time. I think I'd remember it if it had been widely quoted.

My God, my God, why have you abandoned me?
Why so far from my call for help, from my cries of anguish?

But Coverdale adds something noticeably different:

My God, my God, look upon me; why hast thou forsaken me,
and art so far from my health, and from the words of my complaint?

I wonder what his warrant for "look upon me" was.

Hear my prayer, O Lord,
and let my crying come unto thee.
Hide not thy face from me in the time of my trouble;
incline thine ear unto me when I call; O hear me, and that right soon.
For my days are consumed away like smoke
and my bones are burnt up as it were a fire-brand.
My heart is smitten down, and withered like grass
so that I forget to eat my bread.

The reading for Mass does not include 3 and 4 ("For my days," etc.). But I'm including them because I think they're pretty powerful.

Make me a clean heart, O God,
and renew a right spirit within me.

O Lord my God, in thee have I put my trust;
save me from all them that persecute me, and deliver me,
Lest he devour my soul, like a lion, and tear it in pieces
while there is none to help.

My song shall be alway of the loving kindness of the Lord;
with my mouth will I ever be shewing thy truth from one generation to another.
For I have said, Mercy shall be set up for ever;
thy truth shalt thou stablish in the heavens.

So he said, he would have destroyed them,
had not Moses his chosen stood before him in the gap
to turn away his wrathful indignation....

This is a case where the Grail translation strikes me as more powerful:

Then he spoke of exterminating them....

No real difference even of emphasis, but somehow "exterminate" seems more intense.

...performed by the Westminster Abbey Choir and the Abbey Consort, under the direction of Martin Neary.

I received this CD as a gift a few years ago, a fact which I mention because the cover photograph would probably have kept me from buying it for myself. 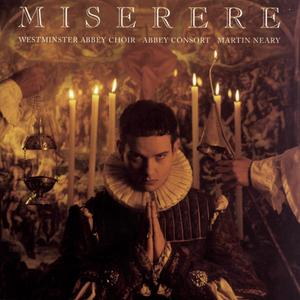 This picture of a rather malevolent-looking young man struck me as the sort of thing a record company might do to get the attention of a browser (this was 1994) for what I presumed to be a sort of anthology of liturgical music on the themes of Holy Week, with Allegri's well-known Miserere as the selling point. I say well-known because even if you don't recognize the description you may well have heard it, as its striking long high ornamental melody has been heard in sound tracks.

I was wrong on both counts--about the photo and about the music, I mean. More about the photo shortly, but the music is by no means a casual miscellany, as the number of different composers included had led me to suppose. It is instead a carefully constructed program of first-rate music beautifully performed. I've listened to it five or six times in recent weeks, and it's become a favorite.

The centerpieces, so to speak--more accurately, bookends--are two settings of the Miserere, or Psalm 51. In addition to Allegri's, there is one by Bai. Here is what the very extensive liner notes say:

It was a desire to set this remarkable pair of Miserere settings in some kind of fruitful apposition that was the point of departure for the present recording. This gradually assembled itself around their twin poles to form a near-palindrome of chant and polyphony for Holy Week: a musical meditation on the Passion and Death of Christ that revolves slowly on itself like a solemn ring-dance of penitence and mourning.

Plainchant and polyphony alternate. The first track is a plainchant hymn, "Vexilla Regis" ("The King's banners"). Next is Allegri's Miserere, then the plainchant antiphon "Christus factus est" ("Christ was made obedient"). And so on. Next to last is the Bai Miserere, (credited to Bai and Allegri, for reasons discussed in the notes), and then a closing plainchant hymn with a refrain (I think) composed by King John IV of Portugal.

The polyphonic works were all written in, roughly, the late 16th and early 17th centuries, except Bai's, which is a bit later. The other composers are, in order of appearance, Lotti, Gesualdo, Gabrieli, and Monteverdi. Of their works included here, I like Gesualdo's best, which is not surprising. Church polyphony is in general a kind of music for which I have more respect than genuine love. I usually feel like I don't entirely get what's going on; I suppose I'm not sensitive enough to harmony, and the kind of instantly affecting melody that one hears in the Allegri Miserere doesn't appear very often, at least to my ears. But there's something about Gesualdo's music that appeals to me, something that seems a bit strange and a bit dark, though that latter perception may be partly a result of the fact that the only music of his that I've heard is for the Tenebrae service. And perhaps even something to do with the fact that Gesualdo is, as far as I know, the only composer of note to have murdered his wife and her lover.

Which brings me to that photo. As I mentioned, the liner notes for this recording are extensive, including a very detailed essay which focuses on the performance history, both technical and historical, of the Allegri, as well as the Latin texts and their English translations. (The two Miserere settings were for more than a century heard only in the Vatican during Holy Week, and were a very big deal. Dickens tried to get in, but couldn't; Mendelssohn did, and made a transcription of the Allegri. The fourteen-year-old Mozart had done the same, only he didn't bother to actually write it down till afterward.) By the time I got to the acknowledgments at the end of the booklet, I didn't pay much attention: thanks to "the Dean and Chapter of Westminster, all at Sony Classical," etc. etc. But later, trying to find out who was responsible for the cover, I read them more carefully, and discovered this credit: "Roberto Valeri (Prince of Venosa)".

Then it dawned on me, and I checked Wikipedia: yes, Prince of Venosa was Gesualdo's formal title. And the back cover of the booklet shows the prince in an attitude of devotion, touching a crucifix to his forehead, and looking troubled.

So that cover which I found off-putting is actually a subtle comment on sin and repentance, most appropriate for the project. According to Wikipedia: "The evidence that Gesualdo was tortured by guilt for the remainder of his life is considerable...."

Not surprisingly, this recording of Allegri's Miserere is one of many to be found on YouTube: