Time For Me to Read The Moviegoer Again

Rod Dreher quoted this, in a post about celebrity:

Nowadays when a person lives somewhere, in a neighborhood, the place is not certified for him. More than likely he will live there sadly and the emptiness which is inside him will expand until it evacuates the entire neighborhood. But if he sees a movie which shows his very neighborhood, it becomes possible for him to live, for a time at least, as a person who is Somewhere and not Anywhere.

A few days ago I was watching the movie Alabama Moon with my wife. I don't especially recommend it, at least not for grownups. Some children may like it, and in fact that's why we were watching it--the DVD was part of a big gift basket my wife had bought at our parish's Christmas bazaar, and we wondered if our grandchildren might like it. (Verdict: very doubtful, as there are no spacecraft, superheroes, or battles in it.)

I had a vague notion that some parts of the movie might have been filmed where I live. Several locations did look familiar. Then came a scene set in a hospital, and I was almost sure that it must have been filmed in the local hospital (labeled, for purposes of the story, Tuscaloosa General, which I think does not exist, as if you care). This gave me a completely absurd moment of elation. And later, when I looked for information online and found out that it was mostly filmed in Louisiana and so the hospital was probably not ours, I felt an equally absurd moment of letdown.

It's still possible that the hospital scene was filmed here. The film credits thank Fairhope along with Covington, Louisiana. And it really looked like Thomas Hospital. But of course I don't really care.

I'm told that a local radio host introduced his show that way yesterday. He's referring to the cone on hurricane tracking maps. As of this morning the cone for Hurricane Zeta is narrow and we are not actually in it, according to NOAA. We're in the blue area. If the storm actually follows that track, it won't be a big deal for us. There'll be a strong south wind which maybe will straighten some of those trees bent over by the north winds of Hurricane Sally. 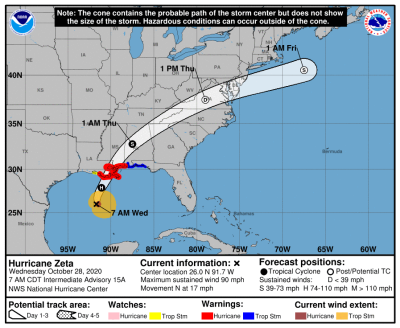 We are really sick of this. This is the fourth time this year that we've been in the cone. Only Sally really affected us, and that was as close to a direct hit as we've had since I moved here in 1992. Thousands of trees were knocked down, and a good number of those fell on power lines. We've never had such an extended power outage--six days, I think. But it could have been a lot worse, as it was only a middling sort of storm as hurricanes go.

Here's the view looking up the street from in front of my house the morning after Sally. 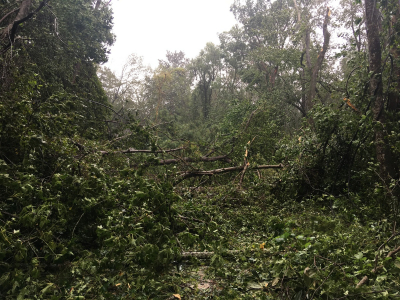 At the middle of that pile is a pine tree about 18 inches in diameter. I'd guess that pines accounted for at least 3/4 of the downed trees. Streets and roads are still lined with piles of debris. I saw an estimate that there's something on the order of a million tons of it. My yard still looks like one of those morning-after battlefield pictures. 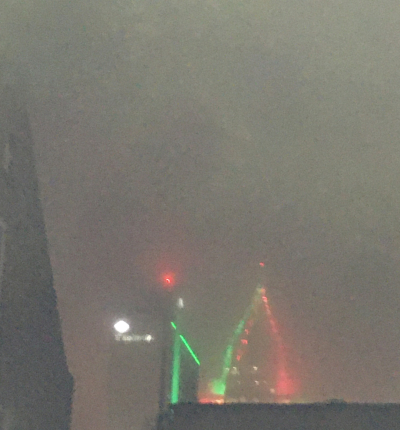 This message was well above the waterline, but would have been blown away, or mostly blown away, by now, as we've had some windy days since then. 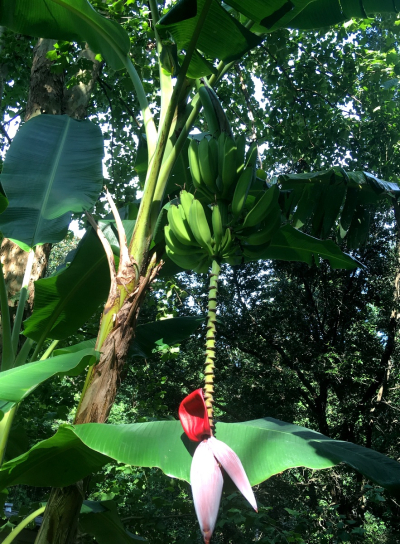 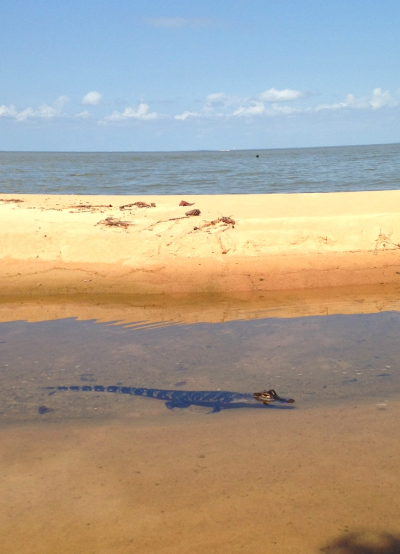 Sometimes I forget that the group of people who read this blog and the group who see what I put on Facebook overlap but are not identical. I posted this on Facebook one day last week, so some of you have seen it. Here it is for those who have not.

I was sitting in my portable chair working by the bay one day a couple of weeks ago when this heron landed nearby. That's a bit unusual, so I took out my phone and started recording, mainly for the benefit of my local grandsons, who have seen these birds but not so close. I wish I had zoomed in before the bird caught the first fish. Probably someone who knows something about video could bring out more detail in the bird, which is mostly in shadow. But I decided not to let the perfect be the enemy of the good.

As I've often lamented, the little town where I live has gotten all uppity and is overrun with rich people, many of whom are artsy, which is sometimes almost as bad as uppity. But there are benefits, too, and one of them is that there is now a Fairhope Film Festival.

It ran Friday through Sunday of this past weekend. My wife and I considered trying to catch several of the films, but there was really too much else going on. So we picked one that looked particularly interesting: The Jewish Cardinal, a French movie about Cardinal Jean-Marie Lustiger, whom you may remember as something of a protege of John Paul II. Born Jewish, he became a Catholic in 1940 at the age of 14, a priest in 1928, and archbishop of Orleans in 1979, quite early in the papacy of John Paul II.

The film covers almost exclusively a period of a bit less than ten years, from his consecration at Orleans until sometime toward the end of the 1980s. It focuses on his relationship with the pope, and on his role in the controversy surrounding the establishment of a Carmelite convent at Auschwitz. As you no doubt remember if you're old enough, that was quite a bitter controversy. I didn't follow it very closely, but I know that Jews objected very strongly to it, and Christians objected to their objection.

If the film is accurate, Lustiger was very involved, was deeply affected, and found himself at odds with John Paul. I don't know enough to say whether it is accurate, but I can say that taken on its own terms it's an excellent piece of work, very well produced and acted. See it if you get a chance.

As we left the auditorium in the library where the movie was shown, I told my wife that next year we'll take Friday off work and spend the whole weekend going to movies.

Jiggity-jig (though Janet spells it "jiggety").

Alas for me! For I have beheld the crawling chaos Nyarlathotep, which dwelt in the red cooler in the kitchen. Full many and many a dark aeon, even since the Fourth of July, had it brooded in darkness, forgotten of men and nurturing the impious vengeance merited by that forgetting, and gathered unto itself certain unhallowed vermin of the lower air, which whispered foully to it of what it might become. And in the end it was that blasphemous thing of which the sly and ill-favoured merchants who embarked from the black galleons in the port of Dylath-Leen to trade in rubies of doubtful origin would speak only in whispers.  And when it had been carried into the uttermost reaches of Y'ard, and, emerging from the cooler, slid loathsomely over the withered and unwholesome vegetation, none there was who could say what that thing once had been but I, who cast it out, and am the same who beheld it and knew it for what it was. And I fear that the shadow of that unholy vision will never depart from me, nor the stench ever fade entirely from the red cooler.

--from "The Forgotten Watermelon of Ga-Yfer", by Dunwich Arkham