Things That Annoy Me

Last September I lamented that the "lie-lay" distinction seems to be a lost cause. Joining it now, I think, are certain uses of "obsess" and "cliché." I've recently come across sentences like these in the writing of two forty-ish (I think) people, both very well educated, one of them a Ph.D:

I am obsessing about that movie.

That movie is so cliché.

And these instances are in books, not casual online commentaries, email, or text messages--books edited and published by reputable publishers, and so presumably approved by at least one competent editor. I despair.

If you don't notice anything wrong with these sentences, well, I guess you're on the right side of history for the moment. They make me wince, if not worse.

When you can't get something out of your head, you are not obsessing about it. It is doing the obsessing, not you. It is on the active side of that verb. It is obsessing you. You are obsessed by it.

Cliché is a noun, not an adjective. I'm not sure that it's even really a good thing to turn it into "clichéd," as in "That movie is so clichéd." I'm out of my grammatical depth in trying to analyze that, but it sounds better than "so cliché."

My authority for these judgments is my Webster's New Twentieth Century Dictionary (Unabridged), published in 1966. I guess it's a relic now, like me. It's falling apart, also like me. So cliché.

I Hate The Sprawl

I have always hated The Sprawl

I will always hate The Sprawl.

Not about, but on the occasion of: the complaint I made last year about the thing called "Holiday":

The American Christmas has always, or at least since the middle of the last century or so, had its secularized aspect. That was fine: we were a predominantly Christian country, but plenty of people who did not celebrate the religious holiday as such found much to enjoy in the cultural paraphernalia. Irving Berlin gave us "White Christmas," which no decent person could dislike or resent, and he was Jewish. Notice, though, that he didn't shy away from using the word "Christmas." From an early age I had a sense that something was missing when the decorations and greetings and such of the season left out any mention whatsoever of Christmas itself. And at a not so early, but not very late, age it occurred to me that "the holiday season" would lose the essence of its charm if the religious core of it were removed.

Well, that has pretty much happened now as far as public speech is concerned.

"Middle of the last century"? I must have meant to say the 19th. It certainly predated the middle of the 20th. But anyway:

The good part of this is that as I lose interest in Holiday I take more notice of Advent.

Posted at 09:39 PM in Advent, Christmas, Livin' in the USA, State of the Culture, Things That Annoy Me | Permalink | Comments (3) 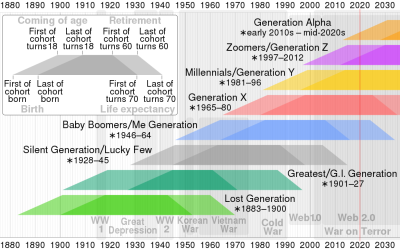 And I think it borders on crazy. I guess it started with the "lost generation" of the 1920s. But that term was just an observation that Gertrude Stein made about a particular set of extremely atypical artists. I don't know whether it was ever applied to an entire cohort of people who just happened to have been born around the same time. It certainly wouldn't have made much sense to classify my wife's grandmother, born ca. 1900 in rural Mississippi and growing up in circumstances more 19th than 20th century, more frontier than suburbia, with Ernest Hemingway's crowd.

If you can even call it writing.... Maybe just jargon. Or guff.

I received an email on my work account with this subject:

I wondered what it meant. Training for the purpose of preventing something, apparently. Opened the email and saw a company logo with this text:

So I read the first paragraph:

Did you know SafeColleges Training provides a variety of effective student prevention courses through a robust training system?

Only by reading as far as the second paragraph did I learn that they are referring to training aimed at "encouraging healthy behaviors" on topics like drugs, alcohol, and sex.

...people would stop saying "science" when they mean "research," presumably scientific research. As in "The science shows that..."

Does the Pope Believe in the Resurrection?

Some weeks ago I was asked about a remark attributed to Pope Francis by that journalist he talks to from time to time, Eugenio Scalifari. According to Scalifari, the pope said that the resurrection of Jesus did not actually happen as a physical event. This was one of those conversations with the 90-plus-year-old journalist who neither records nor takes notes of his "interviews." So (1) who knows what Francis actually said? (2) who knows what Francis actually meant? (3) who really cares, unless something more definite is known about (1) and (2)?

So much for that. But my correspondent had searched for something like "does the pope believe in the resurrection?" and had turned up something more serious, albeit happily more obscure. The web site of a self-described "reformed, Calvinistic, conservative evangelical publisher" based in Edinburgh, "Banner of Truth," asserts that Benedict XVI clearly denies the resurrection. A look around the site reveals that it also pushes old-school anti-Catholicism: Far From Rome Near to God: Testimonies of Fifty Converted Catholic Priests. So it's not surprising that in an article called "Does the Pope Believe in the Resurrection?" Matthew Vogan says the answer is no:

Continue reading "Does the Pope Believe in the Resurrection?" »

The title would be applicable at least once a week. In a comment on some current-event-related post a while back, Janet said "Don't make me defend Trump." I find myself in that position a lot. So do enough people, I guess, that the Babylon Bee did a post about it.

It's maddening. I really haven't changed my negative view of Trump. But the unrelenting effort by Democrats to destroy him by, apparently, any means necessary, makes me at least a little sympathetic toward him. Or at least toward the truth which is such a frequent casualty in this war.

I'm thinking right now of the insane bit of controversy that's happened over the past few days. Trump wondered out loud whether disinfectants should be studied as possible measures against COVID-19. That was immediately turned into "Crazy Trump Tells People to Drink Disinfectant." And then they warned people not to do it. As if the idea would ever have occurred to anyone without the help of the press.

If you want to read a careful account of what Trump actually said and the way it was handled, read this piece by Andrew McCarthy: The Times Inflates Trump's Foolishness Into Monstrousness.

How depressing is the erosion of the principle that when the president of the United States speaks, it means something, that it’s not just stream-of-consciousness that willy-nilly gets revised or reversed or treated like he never really said it. Just as depressing, though, is the media’s abandonment of straightforward fact reporting, in favor of unabashed alliance with Trump’s political opposition.

Why do blind partisans and demagogues have such sway these days? Because no one can trust the reporting of institutions we used to expect would give us an accurate rendition of the facts being debated....

When the president speaks publicly, he should stick to what he is in a position to convey factually, not hypothetically. Especially when it comes to scientific and medical information, as to which he is quickly out of his depth.

At the same time, no matter how much the press abhors Trump, no matter how sincerely believed its conviction that he is a dangerous man who will induce people to do dangerous things, reporters worthy of the name do not have license to portray Trump as living down to their worst fears when he has not. If he says dumb things, they should report that he said dumb things. That’s bad enough (and since they’re clearly hoping to hurt him politically, nothing stings like the truth). The press destroys its own credibility, however, by reporting the president’s ill-advised remarks as if they were culpably, recklessly irresponsible remarks.

I don't care much about Trump's political fortunes for Trump's sake, but I do care about the transformation of most of the national press into a weapon for his enemies, because it means that the institutions which are supposed to inform us, and are always eager to preen themselves upon their own importance, have more or less abandoned that duty where domestic politics is concerned. When I said "Democrats" earlier, I meant the word to include most of the media. As McCarthy says, "No one can trust the reporting." And as a journalist of another time used to say, "That's the way it is." 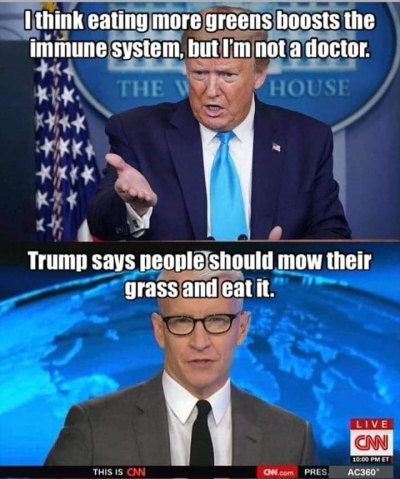 And by the way Al Gore never claimed to have invented the Internet.