Would Anyone Care to Test This?

Besides a useful search function, another thing that I've sometimes wished I had for this blog is a simple way for readers to be notified of new posts. Now that I've given in and set up Google search, the first point is taken care of, and I may have found a solution for the second in a service called follow.it (their capitalization). The form below is supposed to allow you to enter an email address, click "Subscribe," and thereafter get an email for new posts. I think it works but I would be interested in having others try it and let me know if it works and if there are any contra-indications. One thing I'm not sure about, for instance, is whether it requires you to register with follow.it. I was already registered when I tested it. If it's useful, I'll tailor the colors etc. of the form so that it fits the rest of the blog and put it on the sidebar.

One possible negative is that it seems to send an email for new comments as well, which could easily be annoying. That may be something I can restrict on this end, I don't know yet.

I'm supposing that this will only be seen by people who read the blog fairly regularly: do you ever use the sidebar links to other blogs, the bit labelled "Elsewhere"?

I never do, and it hasn't been updated in I don't know how long, so that I don't even know if the sites referred to are active or for that matter extant. So I'm thinking about getting rid of it and wondering if anyone would miss it.

Rob G asked the other day whether there would be another 52 Somethings feature in 2017. The answer is "I don't know. Maybe."

For the past couple of months I've been giving a lot of thought to the future of this blog, asking myself whether I should continue it or not. Here follows the internal debate. Scroll down past the bullet points if you just want the conclusion, which is helpfully labeled "Conclusion."

Conclusion: Ok, that's four arguments for continuing and six against, therefore...I'll continue. The decisive argument is simply that I want to, never mind all the reasons against. So, that's settled.

However, I'm going to change things. I'm restarting the Sunday Night Journal. That may seem a little crazy in light of what I've just said. But it's going to be pretty much all I post, unless we continue the 52s, which I'll get to in a moment. And it's going to be different from its earlier incarnation. I tried to, and frequently did, make each of those entries a coherent and carefully written mini-essay. I'm putting that kind of work into the next book now. The new SNJ will be less formal, and more of an actual journal: comments on current events, books I've been reading, music I've been listening to, and that sort of thing. I won't be doing the substantial reviews that, for instance, Craig Burrell does so wonderfully. (There are about half a dozen books right now that I've wanted to discuss, but haven't because I didn't have time for that kind of review.) My hope is that this weekly feature will be a catalyst and focus for conversation.

Since I was thinking of posting only the SNJ, I considered not posting anymore on this blog and creating a new one called the Sunday Night Journal. But I think I'll just stick with this. I may want to do other posts occasionally. (I would like to revamp the design for this one, but probably won't get to that for a while.)

So, about the 52 Things. I sort of thought there might be little or no interest in doing another one. But if people are interested, sure, let's. I'd like to do it a little differently, to keep it from being a problem for me. Whatever item we pick needs to be one for which I can rustle up something quick in the event that no one else does. I won't bother trying to set up a schedule, for instance, since so far it's started falling apart by halfway through the year or so. You can just send me things, and I'll post them. If I have multiples available on hand at any time, I'll post them in order received. If I don't have anything, I'll write something. Simple. Here are some possibilities that I've thought of:

52 Albums (Pop or Classical? Or separate them?)

I have enough of any of these stored in my head that I could easily write a few paragraphs about a couple of dozen of them over the course of a year, though of course I would hope I wouldn't need to. My contributions would tend to be brief, but that doesn't mean others' need be. 52 Poems would be a bit of a problem because it can be time-consuming to format a poem for web reading, so let's don't do that one this year, if at all.

So, what do y'all think?

By the way, about the book: if you were reading here several years ago (2011?) you would have seen bits of it posted as SNJ items. It's sort of half-spiritual-autobiography a la Surprised by Joy, and half cultural history-criticism. The working title was--well, still is, I guess--War In the Closed World. But that may change. I'm considering Weak and Afraid, after the eccentric (to say the least) musician Ross Johnson:

I'm weak and afraid--and it's a lifestyle that's working for me.

Tomorrow, Saturday the 2nd, I'm hoping to do something that's about five years overdue. I think it was 2010 when I moved this blog from Blogger to Typepad. I have a domain name, www.lightondarkwater.com, which still points to the old blog, though if you go there it redirects you here. I need to point that URL to this blog, and if nothing gets in the way, I plan to do that tomorrow. Those changes can take a day or so to propagate all around the net. So depending on how you go about getting here, there could be some odd behavior till things settle down.

New Blog On the Block

Toby D'Anna, who is among the people planning to contribute to the 52 Authors project, and in fact will lead it off with a piece about Flannery O'Connor, has started blogging (again, actually, but the other one was some time ago). It is excellent, and although I've gotten to a point where there aren't really very many blogs that I read regularly--half a dozen, maybe--this has become one of them. It's called Onto the Search, and here is his introductory post, published the day after Thanksgiving.

Happy 10th Anniversary To This Site

The first Sunday Night Journal was unveiled to an eager public in January 2004. Here is a link to that month's archive; the very first post was a review of Return of the King (the movie). The posts appear latest-first, so that post is at the bottom. I think I had put up some sort of "Hello World" announcement, probably including the assertion that it was not a blog, at the end of December, but I'm not sure. At the time I intended to publish only the one weekly piece.

For the first couple of years it was a very simple web site done with hand-coded HTML and CSS. I got tired of maintaining that, and also decided that I really wanted to have comments, and more casual posts, so I started a blog with Blogger. I believe that was in June of 2006. In 2010 I moved it here from Blogger. Soon after that all the previous comments were lost, which is too bad because there were some great conversations there and I'm sure future historians would have been fascinated by them.

It was actually only last year that I finally got all the stuff from the first two and a half years posted here. Wonder how many words there are in the whole shebang.

This Could Have Been Me

After my first day of school in Victoria, my mother was walking me home and I asked, "How long do I have to keep going there?" She said, "About 12 years." I burst into tears and was inconsolable for the rest of the day.

from a blog which someone linked to on Facebook yesterday. Is Hilary Jane Margaret White not a magnificent name?

Is TypePad mainly for women?

Or are most bloggers female now, or what? As you can see from the URL, TypePad is where this blog is hosted. They recently redesigned their own web site. The new look struck me as feminine, but I didn't really give that any thought until I had logged in to it a number of times and finally stopped and noticed the content of the page. "Crafts, food, style"? And every one of the blogs displayed on the page is by a woman. I don't care--it's a good service and I'm happy with it--but it seems a little odd. Surely it's not accidental. You don't get the same feel from the WordPress homepage. 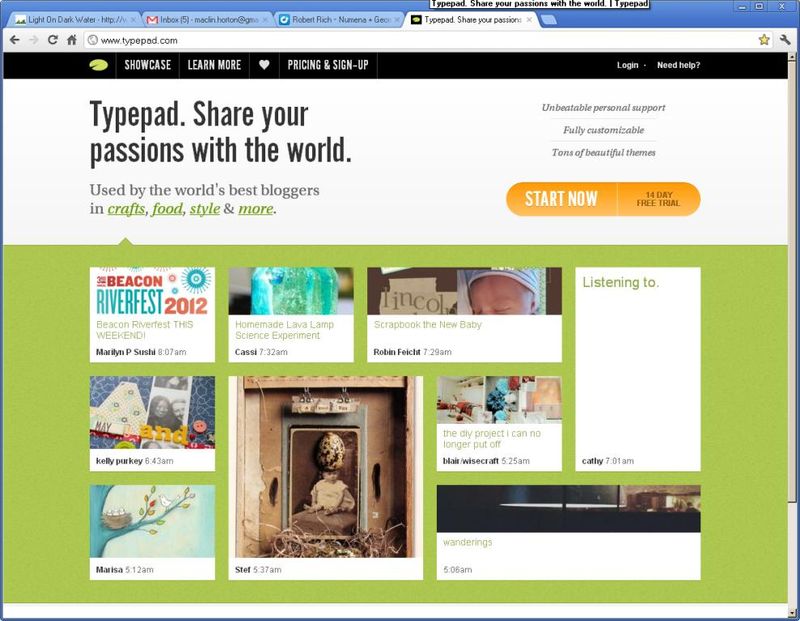 One never has time to read everything on the web that looks interesting. Well, that's almost a pointless thing to say, like observing that you can't drink all the water in a river. Anyway, one thing that I've thought looked pretty interesting but haven't ever read very much is a blog called Unequally Yoked, which Eve Tushnet sometimes discusses, and which appears to have begun as a forum in which a couple, one atheist and one Christian (the gal and the guy, respectively), attempted to understand each other's views in a dialog. I guess one reason I didn't follow it was that it's somewhat over my head intellectually--seems to be a good bit of philosophy-major-type stuff. (For instance:

I could hypothesize how a Forms-material world link would work in the case of mathematics (a little long and off topic for this post, but pretty much the canonical idea of recognizing Two-ness as the quality that’s shared by two chairs and two houses, etc.  Once you get the natural numbers, the rest of mathematics is in your grasp). )

Well, the atheist has converted: here's Eve's post about it, from which you can get to the atheist's announcement of her change. It's that same old story, the one we always love to hear:

I believed that the Moral Law wasn’t just a Platonic truth, abstract and distant.  It turns out I actually believed it was some kind of Person, as well as Truth.  And there was one religion that seemed like the most promising way to reach back to that living Truth.

I wasn't at all surprised. On the few times when I did read the blog, it seemed to me that she understood Christianity far too well not to come over. Say a prayer for her; I always worry a bit about converts, that their enthusiasm will wear off, or that the questing energy which brought them in will take them out again. I don't know why I don't just look at myself for reassurance on that score; one of the very few good things I can say about myself is that it would take torture to get me out of the Church. (By the way, I think she and the Christian parted company a while back.)

Speaking of converts, Dawn Eden has a new book out. Here's some discussion at Patheo.com. I plan to read it, though the subject is not one that I have any particular connection with, just because she wrote it.

At Caelum et Terra and Neo-neocon.

Daniel isn't going to like sharing that recommendation with a n**c**, but it's a very fine post: "the love that was always, always there."