Would Anyone Care to Test This?

Besides a useful search function, another thing that I've sometimes wished I had for this blog is a simple way for readers to be notified of new posts. Now that I've given in and set up Google search, the first point is taken care of, and I may have found a solution for the second in a service called follow.it (their capitalization). The form below is supposed to allow you to enter an email address, click "Subscribe," and thereafter get an email for new posts. I think it works but I would be interested in having others try it and let me know if it works and if there are any contra-indications. One thing I'm not sure about, for instance, is whether it requires you to register with follow.it. I was already registered when I tested it. If it's useful, I'll tailor the colors etc. of the form so that it fits the rest of the blog and put it on the sidebar.

One possible negative is that it seems to send an email for new comments as well, which could easily be annoying. That may be something I can restrict on this end, I don't know yet.

The Search Button Doesn't Actually Work Very Well At All

I noticed in the statistics for this blog that the search button has been used a lot over the past few days. Don't feel paranoid: it doesn't record any info about who's doing the search, just that the URL has been referenced. So as a public service I must tell you (if you haven't figured it out already) that the search is unreliable. It's almost worse than no search at all, because it often fails to find the most obvious and prominent things. It's very frustrating.

If I really want to find something, I use Google's site-specific search: follow the search term with "site:www.lightondarkwater.com." For instance, a search for "Mary Karr" (or case variants thereof) using the Typepad search fails to find two recent posts which mention her name. But using this search string with Google does:

I think Google offers some sort of search plugin that can be used to implement a local search, but I tend to avoid using Google these days if there's an alternative. My first choice for internet search in general is DuckDuckGo, and then Google if that result is unsatisfactory in some way. It also has the site-specific feature, which doesn't seem to work quite as well as Google's. I just tried the Mary Karr search there and it got the two recent mentions but not a couple of older ones in comments that Google found.

I should probably at least put some kind of disclaimer on the search button if I can't replace the Typepad search with something better, as it can be quite misleading. It hasn't improved for years so I guess it isn't very important to them.

One of the things that make being a pessimist less enjoyable than it might be is that the pleasure of being proven right about the impending collision with the oncoming train is substantially diminished by the discomfort of experiencing the collision itself. On balance, I would rather be wrong than right about many of my predictions and expectations.

Recently someone remarked that the culture of Catholicism on the Internet seemed to be dominated by those whose motto was taken from Flannery O'Connor's Misfit ("A Good Man Is Hard to Find"): no pleasure but meanness. You can certainly see his point, and of course it's not only the Catholic subculture that has this problem. It's everywhere. I'm not on Twitter, and I don't think I ever will be, so my impression may be distorted, but that impression is that some very large portion of what goes on there consists of people savaging each other, and sometimes of a large number of people attacking one person in what can fairly be described as a verbal lynch mob.

Almost twenty-five years ago, in the Fall 1993 issue of Caelum et Terra, I published a short piece in which I considered the potential for the world of online communication to increase the level of hostility in the world rather than to bring people together. I don't think I had heard the term "World Wide Web" at that point. It did exist but if its existence was known to me at all I'm fairly sure I hadn't yet experienced it, as the original browser, Mosaic, had not yet been introduced to the world at large. But I'd had five or six years of experience in pre-Web online forums, including Usenet, the text-only discussion groups on the Internet, and at least one of the commercial services which provided similar capabilities by subscription. (America Online, or AOL, you may remember, was pretty big at the time.) And I'd seen the way people could turn on each other with startling viciousness.

That piece was called "Global Metropolis," and I've thought about it often since the Web changed our lives so strikingly. But I don't think I'd read it since it was published, so I decided to dig the magazine out of the closet and, if it still seemed relevant, spend some of the time this evening when I would have been writing typing it in instead. Well, I did find it interesting as a view from 1993, and at least part of it seems pretty accurate. The next-to-last paragraph is the one that seems a fairly accurate prediction of the Internet's potential for exacerbating rather than pacifying conflicts.

I sometimes think it might be more accurate to say that we are creating a global metropolis, a violent one like those of the United States, where people perceive each other socially either as naked individuals in isolation from family and community, connected, if at all, by financial ties, or as anonymous components of a class or race. In these great warrens, people live in close physical quarters but without much sense of belonging to the same community; with, in fact, a dangerous sense of having tribal enemies everywhere. What this combination of proximity and anonymity has done for the great cities, television, along with increasing economic interdependencies, may perhaps do for the world at large: to increase both the level of tension and the degree of isolation.

You can read the whole piece here (it's not very long, about a thousand words). I certainly didn't imagine anything like Twitter, which as far as I can tell is an active deterrent to substantial discussion, which is actually intended to reward the quick and superficial remark. The glimpses I get of it make me think of an enormous number of dogs barking hysterically and ineffectively at each other. And if I had imagined it I would never have dreamed that we would have a president who sits in the White House and uses such a ridiculous medium to bark at anyone among the citizenry who annoys him.

I'm not saying that the Internet in general and "social media" in particular are altogether bad--I mean, here I am. And I even have a Facebook account. Still, it seems that the "bringing people together" effect of it is very often to bring them into tribes united by their detestation of another tribe, and thereby to purify and concentrate their anger. The net did not cause the political divisions in this country, but it is certainly exacerbating them.

Still, when I look at the people around me going about the ordinary business of their lives, I don't see this division, and that's a hopeful thing.

A couple of weeks ago on the first Sunday of Advent our priest made the point in his homily that Advent is as much about the Second Coming as it is about the Nativity. "We await the birth of a sweet little baby who will one day destroy the world," was more or less the way he put it.

While watching The Crown on a chilly evening last week I discovered that my old dog, who is too blind and deaf to notify us of strangers in the vicinity, still is capable of service as an all-natural toe warmer. 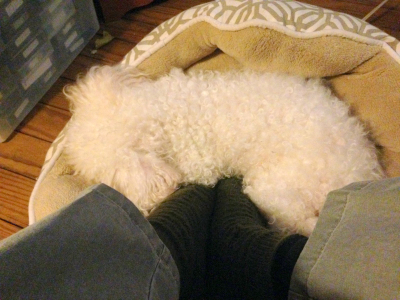 I enjoyed The Crown considerably, by the way, and I think my wife enjoyed it even more. It's wise to keep in mind that they filled in some historical blanks with their own speculations and that it's a mixture of fact and fiction, not a documentary. Claire Foy's performance as Elizabeth is extremely convincing. I must say, however, that I remain puzzled to say the least about the function of the British monarchy.

Have I mentioned that we also recently watched the third series of Broadchurch? I suppose it's not surprising that I didn't like it as much as the first two, but it's still very good. There is apparently little to no chance of a fourth series, which might be a good instance of quitting while you're ahead, but this one left an important matter unresolved, which is a little frustrating. Well, maybe it isn't unresolved--maybe that was just the end of...well, if you've seen it you know what I'm talking about, and if you haven't I shouldn't say any more.

Tomorrow, Saturday the 2nd, I'm hoping to do something that's about five years overdue. I think it was 2010 when I moved this blog from Blogger to Typepad. I have a domain name, www.lightondarkwater.com, which still points to the old blog, though if you go there it redirects you here. I need to point that URL to this blog, and if nothing gets in the way, I plan to do that tomorrow. Those changes can take a day or so to propagate all around the net. So depending on how you go about getting here, there could be some odd behavior till things settle down.

The Spambot Doomed To Bitter Disappointment

"What's up i am kavin, its my first occasion to commenting anyplace, when i read this Kathleen Battle and Wynton Marsalis: Silent Night - Light On Dark Water i thought i could also create comment due to this brilliant article."

"Space is curved, but not much for everyday life here on earth."

"None of this is a surprise."

Make the subject line "Predictive Analytics Say You Will Read This."

"Throw in a patch work face, a southern accent and some hogs and you got a villain that literally makes your skin crawl."