I liked this symphony a lot when I was young, late teens and early twenties. But as far as I can remember I never heard it after that. There was no particular reason for that, though for various reasons with which I won't bore you I'm not sure I had a recording of it after that period of my life. At any rate--again, as far as I can remember--I had not heard it for well over forty years when, a week or so ago, I had a sudden desire to hear it again.

Oh my goodness. It immediately shot up into the highest levels of my personal favorites among the 19th century symphonies. I won't say it's at the top, but it's certainly way up there. I think it's a greater work than I thought back in my youth. I've always tended to think of Tchaikovsky as a bit of a softy, the writer of great melodies and producer of spectacles, but maybe not the most profound of composers. Well, whatever justification, if any, that general view might have, it certainly doesn't apply here.

Is it wrong to equate profundity with gloom? Yes, if you put it that simply. But life produces an undeniable bias in that direction. Is it an error to maintain that tragedy is more profound than comedy? No, not if you stipulate that you're thinking of earthly life in itself, absent the promises of revelation.

This symphony certainly gives us a tragic view of life. It begins in sadness and ends with what I can only interpret as death, with the only consistently somewhat upbeat movement being the third, and that one is certainly not without its stresses, more agitated than happy. And the finale: "Adagio lamentoso," indeed. Tchaikovsky died a week or so after its premier. There was a lot of speculation about his death, with some claiming that it was suicide. You can read about that at Wikipedia, but I'm not sure it's worth your trouble. Better to read about the symphony itself.

The recording I now have is not the one I recall from college. That one was by Toscanini, and had a picture of the conductor on the cover, which was responsible for the fact that I have a tendency to imagine Tchaikovsky as looking like Toscanini. The one I have now may have been part of the Fr. Dorrell trove. If not, I must have picked it up for little or nothing at Goodwill or some other place where a lot of LPs ended up when CDs took over. It's a 1958 RCA Living Stereo recording, with Pierre Monteux conducting the Boston Symphony. And as far as I'm concerned there's no need for another one. I don't know what connoisseurs think of it, but I can't imagine a better performance or recording. I can't think of a better word for the performance than "taut," which such an emotionally extravagant work needs. Let's add "precise," as well, which it also needs. The sound quality is limited by the technology of the times, but within those limits it's spectacular, and I don't think any improvement in clarity in a digital recording could improve its electric quality. 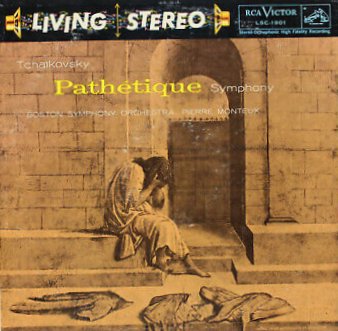 I listened to a fair amount of Tchaikovsky in the early 2000's and must confess to not being particularly taken by the symphonies. I never really went back to them, as Bruckner and Dvorak became my Romantic mainstays.

It's been as long since I heard the other symphonies as it had been since I heard the 6th. I'm not sure I've ever heard the first two or three but I used to like the 4th and 5th, especially the one that uses pizzicato strings for all (most?) of a movement. I'll probably revisit them before too long but I don't recall ever liking them as much as the 6th.

The pizzicato movement is the third of his 4th symphony. I personally like the 4th almost as much (if not even as much) as the 6th, with its opening fanfare that makes a reappearance just before the end. The finale is triumphant to the same degree of intensity as the finale of the 6th is tragic.

I listened to the 4th yesterday and was surprised at how well I remember it, though I had sort of thought the pizzicato movement was a first movement. I must have listened to it as much as the 6th back in my youth. I liked it this time, but not nearly as much as the 6th. Up next, the 5th.

To the symphony, you mean? I figure anyone interested can easily find it on YouTube or some music streaming service. Not necessarily this recording.