Well, that was something.

A couple of years ago I read Alex Ross's The Rest Is Noise, a history of 20th century classical music. (I wrote about the book last year, in this post.) I recall being a bit surprised that the book opened not with that usual-for-this-subject anecdote about the 1913 premier of Stravinsky's The Rite of Spring, but with a 1906 performance of Salome. I've never listened to much of Strauss's music and did not think of him as a modernist bomb-thrower. But Salome preceded The Rite by seven years. And, as I just discovered, it is explosive.

I had thought, on finishing the Ross book, that I would try to work my way through at least some of the major works that he discusses and I had not heard, or not really heard. I'm just now getting around to following up on that. Conveniently, I had come into a recording of Salome not long before, in what I have been calling the Fr. Dorrell trove--several hundred classical LPs left behind when an elderly priest died a few years ago. It's an RCA Red Seal recording from the late '60s, with Montserrat Caballé as Salome and Erich Leinsdorf conducting, and it's one of those wonderful boxed sets of the great age of the LP, with a big handsome booklet containing the libretto and various other material. I put the first disk on and settled into a chair with the libretto.

Never mind the dates: Alex Ross was right to put this opera at the head of the "let's shake things up" line of early 20th century works. It is a far more sensational composition than the Rite, both musically and thematically. A hundred and twenty years later, it still has some power to shock (which I suppose means I am not as thoroughly jaded as I thought).

I had not gotten very far before I thought This libretto was written by a gay man. And sure enough: it's from a play by Oscar Wilde, written before his fall.

He takes quite a few liberties with the biblical text. In the New Testament story, the young and beautiful Salome is the stepdaughter of Herod and daughter of Herod's wife Herodias, and is used by the latter to get rid of John the Baptist. In his eyes the marriage is illicit and immoral, and, being John the Baptist, he says so much too forthrightly for Herodias's liking. Salome dances for Herod, reducing him, apparently, to a state of lustful helplessness such that he swears to give her anything she asks. I can't help figuring he had something more in mind, the dance being over at that point. Herodias prompts Salome to ask for the head of the Baptist, and Herod, trapped by his promise, has to give it to her.

Not so as Wilde tells the story. In his version, it is Salome who is consumed with lust, and lust with an edge of perversion. She  first appears without the other two, demanding of the jailer that she be allowed to see the prophet, and, when the jailer reluctantly obeys her, begins to slaver over the Baptist in very lurid terms:

I am amorous of thy body!
Thy body is white like the lilies of a field
that the mower hath never mowed.
Thy body is like the snows of Judea...
...[eight or ten more lines in this vein]...
Suffer me to touch thy body.

See what I mean? John of course rebuffs and denounces her vigorously, which only adds the spice of anger to her weird eroticism. She disparages his body and has a rhapsody over his hair. Eventually she settles, obsessively, on his mouth, determined to kiss him, and then, when he will have nothing to do with her (beyond telling her to repent), to take revenge on him .

As Wilde retells the story, Herod is Salome's tool, very deliberately led into a trap by her, and while Herodias approves of what her daughter is doing, she's really just a bystander. And in the end Salome gets her wish, after a fashion. Whatever one may think of Wilde's version, it is dramatically effective.

But this is an opera. What about the music? I'm afraid I was too busy following the libretto word for word to really get the music. The opera is in German, and the libretto in this package includes the German and a line-by-line English translation. I have just enough of a feel for German to pay attention to it, but not to understand much of it, and so was constantly switching back and forth between the two texts, trying to keep up with both. I only have a general impression of the music: vivid, discordant, colorful, wildly varied. A few passages did jump out at me: for instance, the moments when Herod has a sense of foreboding, imagining a great wind and "the beating of vast wings." I think I'll like it when I listen to it again. If "like" is the right word. 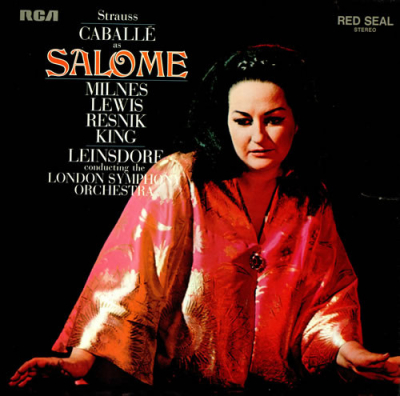 I think the recording is great, by the way. Sonically it's wonderful, and I see a lot of five-star reviews on Amazon.

Something interesting to take into consideration is that, if memory serves, Strauss was something of a Nietzschean atheist. I wonder if Salome reflects any such themes either directly or indirectly.

I've never read any erotica or erotic fiction, but I've obviously encountered eroticism within modern fiction, both mainstream and literary. Your point about intuiting the fact that the libretto was written by a gay man speaks to something inherently different about the way that males and females approach sexuality: males generally approach it much more objectively than women. There are all sorts of reasons for this, as well as all sorts of manifestations, but one of them is the tendency of men, barring the influence of a morality which instructs them to resist it, to treat women as sexual playthings, as "objects." This is, of course, a major criticism about pornography.

I remember many years ago hearing a stand-up comic joke about women complaining that men just want to treat them like sex objects. "What's the problem with that?" he joked. "Men would love to be treated as sex objects. Please treat me as a sex object!"

I think what you recognized is the dissonance resulting from seeing a male tendency being projected onto a female character: Salome is looking at the Baptist not as a lustful woman would, but rather as a lustful man would -- a preoccupation with the lust-object's body as a "thing." Wilde, being homosexual, would have had no way to understand this dissonance.

Coincidentally, yesterday I had a bunch of mp3 files on random play and one song that came up was "O Canada" by Big Hello. The girl is singing about being smitten at first sight by a boy from Canada and it's about his eyes, smile, personality (as best I can make out the lyrics). It's sexual, obviously, but in a broader way. A very fun song from a very fun album, btw--Apple Album. I don't see it on YouTube or I would link to it. There seems to be a K-Pop band called Big Hello. It's not them!

There's also, in the whole opera, a suggestion of misogyny, which is kind of an undertone in the male homosexual vibe. The whole drag thing has always struck me as having that undertone. It's the gender equivalent of blackface.

I don't know about Strauss's Nietzscheanism etc but there is of course the famous Zarathustra tone poem. This opera is certainly not sympathetic to John the Baptist--he just comes across as a puritanical religious nut.

"a suggestion of misogyny, which is kind of an undertone in the male homosexual vibe"

I've always found it interesting that heterosexual women who associate/hang out with gay men (what we used to call in a more benighted epoch "fag-hags") are almost always neither particularly attractive nor plain, but sort-of middling or borderline pretty. I've wondered about the psychology of this on both sides, and have my ideas. One of them is that perhaps the undertone of misogyny in the gay male vibe has more to do with attractive women than women in general? I don't know -- just a thought.

Iirc, Strauss has a symphony which is subtitled "Antichrist."

Haven't heard of Big Hello but will look them up.

'When Strauss began work on the Alpine Symphony in 1911, he did so in the wake of Gustav Mahler’s death. “The Jew Mahler could still gain acceptance in Christianity,” Strauss noted at the time. And unlike Mahler, it was clear to him that he (and the German nation in general) could “only gain new energy through liberation from Christianity”. “I want to call my Alpine Symphony the Antichrist,” he wrote accordingly: “The worship of eternal, glorious nature."'

Not the least bit surprising.

Never thought about that particular aspect of women who like to hang around gay men, and offhand I don't have an opinion. Not all that much experience in observing it. I would be surprised if that basic phenomenon hasn't been discussed a good deal in feminist and homosexual circles. I always supposed it had something to do with gay men being fun but non-threatening. And maybe more interested in more typically feminine things--the stereotype of the gay hairdresser, interior decorator, etc.

Yes, I think that's true about the non-threatening aspect, and maybe from the opposite side, the fact that the women are getting attention from men that they may not normally receive.

Maybe so. That fits with your observation about the less-attractive women. And I think it's just kind of a standing gripe from both sides of the sexual divide that the other sex is not very interested in the things I'm most interested in. Not universal by any means but a tendency.

Re Big Hello, by the way: I'm not making any great claims for them, but, like I said, the album is fun. Falls under the general heading of power pop, I guess. Here's one of the most appealing songs from Apple Album (they only made one other one--Orange Album :-) ).